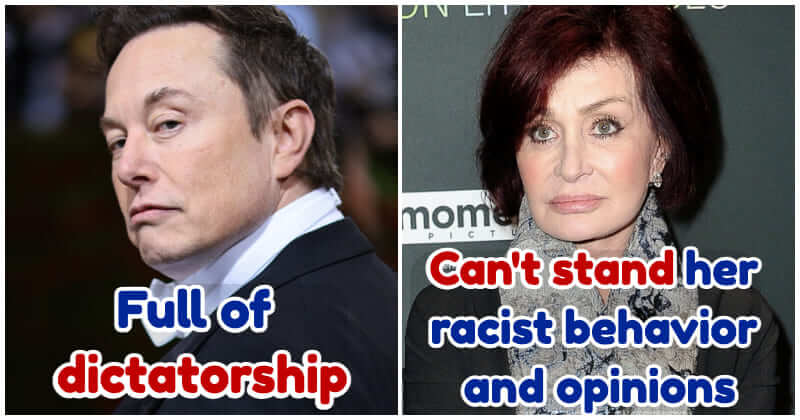 People who are always in the public eye are very easy to admire. When it comes to exceptionally talented people, there is a lot to admire about them, regardless of whether they are our favorite musicians, top athletes, or movie stars. Nevertheless, it can be especially disheartening when people fall from grace, as in this case. A recent thread on Reddit asked users to name celebrities they once looked up to, but no longer do.

Some information, whether it be scandals, rumors, or actual crimes, can drastically alter how others perceive a person. Take a look at some of the famous personalities that have lost their admirers. “I used to be a huge 30 Seconds to Mars fan, and Jared Leto seemed like a solid guy from the interviews I had seen back in the day. Over time, though, I started to realize how pretentious he is. Like, he has some Bono complex, and he sees himself as some profound artist who is changing the world.” From u/gh0stmanX “Sia’s movie Music basically completed the entire checklist for how not to make a movie about autism. She cast a neurotypical person, used Autism Speaks as a consultant, had a very clichéd and unrealistic depiction of autism, and showed dangerous and inappropriate means of controlling autism as if they were normal.” u/RedWestern “I used to think James Corden’s self-deprecating style, his ingenuity with comedy, and the “Carpool Karaoke” idea were great. Then I saw story after story from fan encounters where he is a complete and utter douche. Now that I know he’s a fake, his shtick is unwatchable. There was a time he played the question game with Jimmy Kimmel and couldn’t name two of his own camerapeople.” u/Schlag96 “Gwyneth Paltrow’s bullshit pseudo health information she spreads is terribly incorrect and cringeworthy. It’s sad how many people are actually influenced by it as well.” u/whiterice34 “I wasn’t the biggest fan of Dr. Phil, but I did admire him. It’s been a few weeks since I learned how some people are abused at the Turn-About Ranch treatment facility he sends them to.” u/buggerrrnaut “I looked up to Sharon Osbourne for being an unflappable businessperson and manager extraordinaire who wasn’t afraid to call out Tommy Lee for being abusive to women. Now I read about her racist behavior and opinions, and they can be horrendous.” u/mangokittykisses “Kanye West’s contribution to hip-hop music is undeniable, especially his first six solo albums and his work as a producer in the late ’90s/early ’00s. His public persona was always a bit annoying, but ultimately harmless. 2020 changed that. His presidential run was a bridge too far for me, especially since it was supported by right-wing operatives who probably wanted to use him as a spoiler candidate. And the quality of his music has also diminished. Not a lot of redeeming qualities left to hold on to.” u/HutSutRawlson “Tom Cruise went deep into Scientology. The shit he did to his exes is, to me, akin to what Britney Spears is going through.” u/drunkenWINO “I thought Ellen DeGeneres was really wholesome, and watching her show used to make me feel warm and fuzzy, but then I started getting really soul-leeching sort of vibes from her, and now it just feels like she’s using people. I’m sure it’s always been like that. I mean, she’s there to be paid to entertain people, after all.” u/UhnonMonster “I was an Elon Musk fan. Mass Effect is one of my favorite franchises, and I saw Elon and SpaceX as a way of achieving something like the future in Mass Effect. Later I learned that he exploits the fuck out of his workers. I still like SpaceX, and I think they will probably lead to our future in space exploration, but Elon is on top of my shit list, just like most, if not all, billionaires and millionaires — especially the ones who are garbage to the people who made their companies what they are today.” u/RaccKing21 “I used to think Jeffree Star was really cool for being self-made and ‘not tolerating the haters,’ and his whole message about being yourself was so appealing to me. Then I found out about all the stuff he’s allegedly done, which, combined with how he doesn’t take ANY accountability and shifts the blame around, ruined him for me.” u/ado_adonis

15+ Stunning Celebrities Who Look To Be Aging Backward