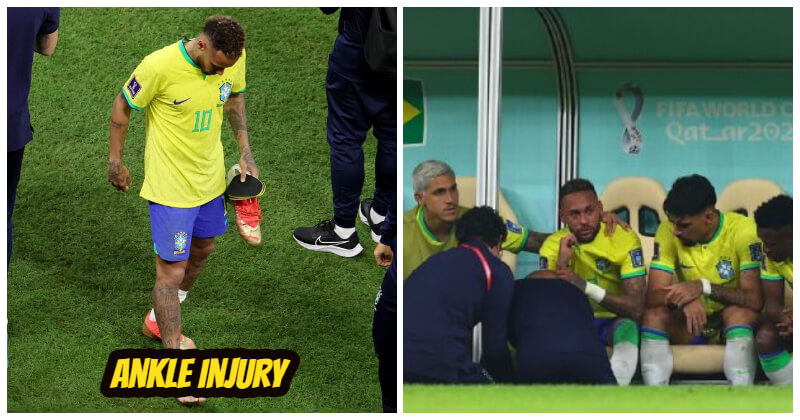 Brazilian star Neymar Jr. was pictured in tears on the bench after leaving his team’s 2-0 win over Serbia to start their World Cup campaign in Qatar on Thursday. He was reportedly in trouble with his right ankle.

Neymar, the biggest Brazillian star right now, is considered to lead his national team to seek a sixth World Cup trophy. However, he must wait between 24 and 48 hours to decide whether he will play the rest of this year’s tournament, according to team doctors. Neymar left the field when his win was so close to the end, with 10 minutes remaining. He hid his face in his shirt as medical staff treated an ankle that he appeared to roll under a challenge earlier on in the game. In a statement to the media at the end of the game, Brazil team doctor Rodrigo Lasmar said it is still too early to evaluate how serious Neymar’s injury is.

“Neymar has an injury on his right ankle, a direct trauma,” Lasmar said. “Due to the impact from the knee of the Serbian player, we started immediate treatment on the bench.

“He continues with the physio, but now needs to wait 24 to 48 hours for a better assessment. There is no MRI scan scheduled, but tomorrow we will make a new assessment. We need to wait and cannot make any premature comments.

“He felt this pain throughout the game but chose to stay on the pitch to help his team for 11 minutes after his injury. It’s remarkable that he did this.” The PSG star has been at the heart of an electric attack for Brazil as Tottenham striker Richarlison scored twice — including a stunning second — but the Selecao will now face a nervous few days as they await more news on the fitness of their star player.

The 2014 World Cup in his home country was ruined by a back fracture and Brazil was also underwhelmed in 2018. Neymarorobaly face his last World Cup tournament this year.

WHAT NEXT FOR NEYMAR?

Brazil will next take on Switzerland in Group G. Yet, there’s no conclusion on whether or not the 30-year-old Paris Saint-Germain forward will have recovered in time.

Real Madrid Rudiger Was Criticized As ‘Arrogance’ In The Match Vs. Japan

Players Who Scored In 6 Consecutive World Cup Matches, No One Named Ronaldo!

Which Football Club Does Jude Bellingham Play For And How Much Is He Worth Now?

Who Is The Youngest Goalscorer In World Cup History – Gavi, Messi, or Pele

Who Will England Face In The Round Of 16? All The Details

Cowboys Running Back Ezekiel Elliott Could Be Out Vs. Packers

A Seleção Star’s Comeback: How Many Goals Has Cristiano Ronaldo Scored For Portugal?

Top 7 Unbelievable Curses In Football History, With Some Of Them Still Alive