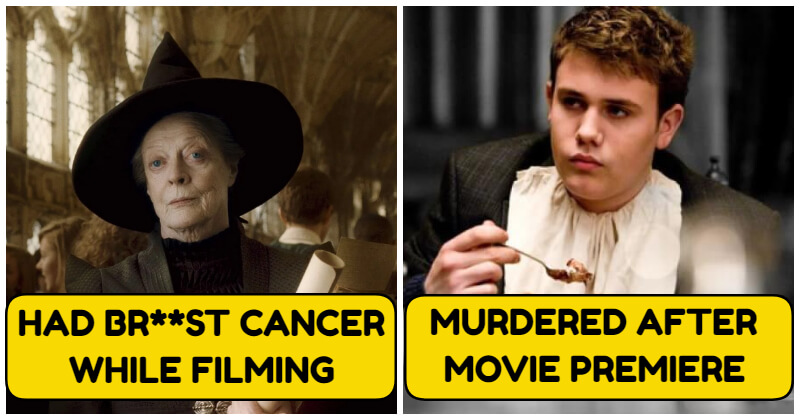 Having ended for more than a decade, the series of Harry Potter still lives on, with its prequel Fantastic Beasts. Though we may have known so much about the three main characters: Harry, Ron and Hermione, there are indeed some fascinating facts about the supporting cast around them, including Luna Lovegood, Neville Longbottom, Cho Chang, and so on.

These minor characters, despite not having been given much spotlight, still carry with them enthralling details that might completely take audience aback.

1. Should Helen McCrory Not Be Pregnant, Helena Bonham Carter May Not Be Casted As Bellatrix Lestrange Strange as it may sound, Helena Bonham Carter was not the initial option for Bellatrix Lestrange, though it’s almost unimaginable if someone else would be casted. Yet Peaky Blinders star Helen McCrory was the first choice for the role, but had to drop out because she was being pregnant at that time.

This led to Helena Bonham Carter able to replace her as the villainous pure-blood witch. Meanwhile, McCrory would later be invited to the series once more, this time representing Bellatrix’s younger sister, Narcissa Malfoy. It’s interesting to know that Dame Maggie Smith, who portrayed Professor Minerva McGonagall, participated in almost every movie in the franchise, even when she was undergoing breast cancer and chemotherapy while filming ‘Harry Potter and the Half-Blood Prince’.

Struggling through the difficulties, she even made her appearance in Harry Potter And The Deathly Hallows – Part 2. At this time, the actress even developed shingles, but she still tried her best to work through, and since then has made a complete recovery.

3. It Was Jason Isaacs’ Idea That Lucius Malfoy Had His Signature Long Hair Initially, Lucius Malfoy, the evil Head of the Malfoy Family, was not meant to have long hair, but actor Jason Isaacs required that. Isaacs first auditioned for the position of Gilderoy Lockhart, but was persuaded into the role of Malfoy.

Upon his cast, Isaacs proposed that Lucius had long hair to differ more from his son Draco. The long hair proved to be both a problem for Isaacs and a signature characteristic for Lucius, as the actor had to keep his head tilted to prevent the hair from falling in front of his face.

4. Saoirse Ronan And Juno Temple Were Among The 15,000 Young Actresses Beaten By Evanna Lynch For The Role Of Luna Lovegood It wasn’t easy for Evanna Lynch to earn her spot as the lovely Luna Lovegood, the fan-favorite amongst the Harry Potter fandom. It was disclosed that Evanna Lynch was able to persuade the franchise producer with her audition, overperforming 15,000 young actresses including Saoirse Ronan and Juno Temple.

5. David Bradley Encaged Himself Inside A Cabin To Prepare For The Role Of Argus Filch You may be surprised for a bit to know that the notorious Walder Frey from Game of Thrones did previously join the cast of Harry Potter. David Bradley, who portrayed Hogwart’s cheerless and bitter caretaker, was known to have rented an isolated cottage in the Irish countryside.

He resided there, alone, with his cat for an entire month before the shooting of Harry Potter and the Philosopher’s Stone. It looked like the intense preparation did work out for Bradley as he successfully embodied the grumpy character.

6. Katie Leung Nearly Gave Up The Role Of Cho Chang To Go Shopping Instead Dominating over 3,000 other actresses for the role of Cho Chang, Harry’s former love interest, Katie Leung in fact nearly failed to make it to her audition. Katie was persuaded by her father to join the audition, right next to the shopping center she wanted to go.

Fed up with waiting for hours in the line, she nearly chose to go shopping but reluctantly waited and ended up earning herself the role. The star who portrayed Clark Kent/Superman in Man of Steel, Henry Cavill, was beaten by Robert Pattinson for the role of Cedric Diggory in Harry Potter and the Goblet of Fire. This was similar to how Pattinson defeated Cavill in the role for Edward Cullen in the Twilight Saga. Fyi, Pattinson declared that he would like to reprise his role as Cedric more than Edward.

8. Gregory Goyle Made His Appearance In All Eight Movies Though He Had Almost No Line Josh Herdman portrayed Gregory Goyle, a fellow Slytherin at Hogwarts, one of the only 14 characters that appeared in every single Harry Potter movie in the series. However, Goyle had almost no dialogue throughout the franchise and was killed off during the Deathly Hallows: Part 2.

9. Vincent Crabbe Was Written Out Of The Film After Actor Jamie Waylett Was Arrested Jamie Waylett, who was cast into the role of Vincent Crabbe, close fellow of Draco Malfoy and Gregory Goyle, had his role written out of the franchise when he was arrested on drug charges in 2009. In 2011, Waylett was arrested once more for his participation in the August London riots, sentenced to 2 years in prison.

10. Robert Knox, Casting Marcus Belby, Was Horribly Killed Before The Premiere Of Harry Potter And The Half-Blood Prince Sadly, Robert Knox’s first appearance in Harry Potter and the Half-Blood Prince as Marcus Belby would also be his last one, as the actor was tragically stabbed to death during an altercation outside a bar in London just days before the film’s premiere, when he was only 18 years old.

11. The Role Of Dudley Dursley Was Nearly Recast Because Harry Melling Lost So Much Weight The obese, bad-mannered cousin of Harry Potter that we loved to hate, Dudley Dursley was portrayed by Harry Melling throughout the entire series. However, the role was nearly recast at one point because of Harry Melling’s rapid weight lost. Ultimately, the actor retained the role and the effects team had to spend nearly half a year to create a fat suit and face prosthetics to fit him. The role of this fellow with at Hogwarts might be most familiar with the audience as portrayed by Scarlett Hefner from Half-Blood Prince through to Deathly Hallows: Part 2. Previously, Katherine Nicholson portrayed Pansy Parkinson in films 1 & 2, Genevieve Gaunt in film 3, Charlotte Ritchie in film 4, and Lauren Shotton in film 5, with Ritchie and Shotton uncredited. One of Luna Lovegood’s biggest scenes is in the Order of the Phoenix where Harry finds her barefoot in the forest feeding the Thestral. It is a memorable scene nonetheless but apparently, it also caused Luna Lovegood actress Evanna Lynch’s feet to become popular on the foot fetish website “wikifeet,” which was an unexpected result from what was supposed to be an innocent scene.

7 Celebrity Mistresses Who Then Became Wives, Then…