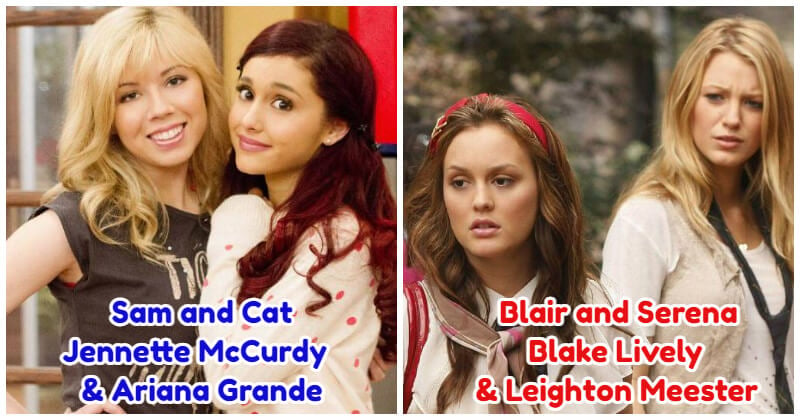 Everything seems picture-perfect in the movies and on TV, but what happens when the camera stops spinning can be a completely different story. While some actors treat their co-stars like family, sometimes, their relationships are not so simple. Indeed, it might be difficult for actors or actresses to get along when they spend their whole day on set for weeks at a time. Especially when they are required to re-shoot continuously, tensions can rise.

After all, actors are human, and some of them can’t get along with everyone. For example, Jennette McCurdy and Ariana Grande can be best friends in “Sam & Cat”, but in real life, they don’t like each other. Or in “Gossip Girl”, while Serena and Blair may have had “similar personalities, interests, and lifestyles [that] brought them together and made them like sisters,” actresses Blake Lively and Leighton Meester aren’t exactly close off-screen. Thankfully, these former feuds have since been settled but it took a lot of time after filming wrapped.

So, scroll down to discover which co-stars didn’t get along in real life as they do on screen.

#1 David And Maddie from “Moonlighting” In “Moonlight” David and Maddie might have had a romance, but when the cameras stopped rolling, Bruce Willis and Cybill Shepherd could hardly stand to be in the same room as one another. Rumor has it that the two actors had an unhappy love affair and a quarrel arose when they were filming.

#2 Elena And Stefan from “The Vampire Diaries” In “Vampire Diaries”, Elena and Stefan had gone through a lot of ups and downs as both friends and partners. But in reality, Nina Dobrev and Paul Wesley weren’t exactly friendly. In an interview on Directionally Challenged, Dobrev said, “I respected Paul Wesley; I didn’t like Paul Wesley.” Now, they’re actually good friends.

#3 Beckett and Castle from “Castle” The relationship between Kate Beckett and Rick Castle in “Castle” was sweet so much that it made us believe in love. But it turns out that Stana Katic and Nathan Fillion do a great job at their jobs because they couldn’t stand one another. “Katic and Fillion completely despise each other. They will not speak when they are off-set, and this has been going on for seasons now” a staff revealed.

#4 Prue And Phoebe from “Charmed” In “Charmed”, Prue, Phoebe, and Piper were not only best friends but also sisters. However, when the cameras stopped rolling, Shannen Doherty and Alyssa Milano couldn’t share a room. According to rumors, one of the reasons Doherty left the show was because of their conflicting personalities.

#5 Dorothy And Rose from “The Golden Girls” Remember that Bea Arthur’s character Dorothy saying, “Oh, shut up Rose!” was very realistic, it turned out that actresses Bea Arthur and Betty White weren’t actually friends in real life. Arthur’s son Matthew Saks said in an interview, “My mom unknowingly carried the attitude that it was fun to have somebody to be angry at. I think she felt she was more of an actress than Betty. Mom came from Broadway. Betty starred on a game show at one point.” William Shatner and George Takei’s relationship in real life is totally opposite to the unity and teamwork of Captain Kirk and Sulu in “Star Trek”. The two actors can’t seemingly say one nice thing about each other. In 2008, Shatner got angry about not being invited to his co-star’s wedding. Then, Takei said working with Shatner was like working on a one-man show in 2020.

#7 Sabrina And Kris from “Charlie’s Angeles” Although Sabina and Kris are two of the three crime-fighting women who get along best in “Charlie’s Angeles,” Kate Jackson and Cheryl Ladd still didn’t have a close relationship. Jackson apparently had a “this is my show, and I’m the star” complex and didn’t appreciate it when Ladd upstaged her. Needless to say, the two weren’t BFFs offscreen. While portraying Kelly and Brenda in “Beverly Hills, 90210”, Shannen Doherty and Jennie Garth may have looked like best friends, but this wasn’t the case in reality. The two actresses nearly got into a brawl on the set of the series. Thankfully, a security guard stopped things before things got nasty.

#9 George And Susan from “Seinfeld” Although in “Seinfeld”, George and Susan were a couple who intend to be married, in real life, Jason Alexander really couldn’t stand Heidi Swedberg. In fact, his contempt for the actress was one of the factors that she was killed off via stamp poison before the wedding ever happened!

#10 McDreamy And Burke from “Grey’s Anatomy” While Dr. Derek “McDreamy” Shepherd and Dr. Preseton Burke are great friends, Patrick Dempsey and Isaiah Washington have had fights. In 2006, the rumor said that the two actors got into a brawl on set. The following year, Washington allegedly called Dempsey a few not-so-nice words, resulting in his getting fired. In “I Love Lucy”, Lucy and Ethel’s pretty relationship is likely a symbol of female friendships. They were best friends, partners in crime, and co-conspirators. Unfortunately, Lucille Ball and Vivian Vance weren’t friends when the cameras stopped rolling. Ball didn’t like the fact that Vance was a beautiful actress, thinking she’d be upstaged in her own show. She even tried to get Vance fired! Eventually, they became friends, but it took a little while.

#12 The Ninth Doctor And Jack from “Doctor Who” “Doctor Who” fans will remember that Ninth Doctor and Jack were best friends. However, that friendship didn’t translate over to actors Christopher Eccleston and John Barrowman. Barrowman thinks that Eccleston’s personality was a downer. In an interview, Barrowman said, “Chris was always grumpy. You don’t always have to be intense. There comes a point when intensity makes you miserable. I think that was the case with Chris.”

#13 Lorelai And Luke from “Gilmore Girls” Because Lorelai and Luke’s friendship is so in “Gilmore Girls,” it can be sad to learn that Lauren Graham and Scott Patterson aren’t exactly best friends in real life. According to Graham, although the set was fun and they weren’t hostile to each other, she and Patterson weren’t exactly close friends.

#14 Buffy And Willow from “Buffy The Vampire Slayer” Watching “Buffy the Vampire Slayer”, people think that Buffy and Willow were pretty much the picture-perfect definitions of best friends. Unfortunately, that wasn’t the case when the cameras stopped rolling. Sarah Michelle Gellar and Alyson Hannigan weren’t exactly enemies, but they weren’t close either. According to Hannigan, the two aren’t even in contact anymore.

#15 Blair And Serena from “Gossip Girl” In “Gossip Girl”, while Blair and Serena pretty much ruled the Upper East Side together, actresses Blake Lively and Leighton Meester weren’t exactly close. Rumored that the two stars’ personalities clashed with Meester thinking Lively was an “egomaniac who views her time on the TV set as slumming,” according to an insider.

#16 Mulder And Scully from “The X-Files” Because Mulder and Scully were once two of TV’s favorite couples, many fans might be sad to hear David Duchovny and Gillian Anderson wanted nothing to do with one another behind the scenes of “The X-Files”. “We used to argue about nothing. We couldn’t stand the sight of each other” Duchovny said in an interview with Metro.

#17 Susan And The Other Housewives from “Desperate Housewives” Despite some drama thrown in “Desperate Housewives”, the housewives all seemed to love one another. But it turns out that Teri Hatcher had a diva streak that the other actresses didn’t find endearing at all. Rumor has it that Hatcher was even a bit of a bully.

#18 Paige And Phoebe from “Charmed” Rose McGowan played Halliwell’s half-sister, Paige in season three of “Charmed”. Well, unless she played Phoebe, sisterly feelings were coming from Alyssa Milano. According to McGowan, Milano made the set so toxic that McGowan would actually cry each time the series got renewed for a new season.

#19 Santana And Rachel from “Glee” In “Glee” while Rachel and Santana had their issues, they were still close friends. The same is not true of actresses Naya Rivera and Lea Michele. Rumor has it Lea didn’t like sharing the spotlight with Naya, resulting in the two not talking by the time the final season rolled around. Jennette McCurdy and Ariana Grande played great friends, Sam and Cat, but their feud erupted when the show was canceled. After learning Grande was getting paid more than her, McCurdy actually refused to go to an awards ceremony! Not only that, McCurdy made fun of Grande on her web series, making a ditzy character named “Gloriana.” Thankfully, the tensions are released.