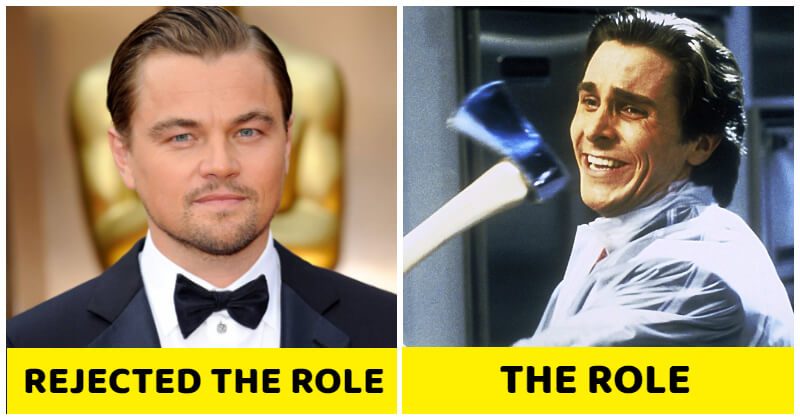 You gotta take the chance when it comes to you, otherwise, you may have a lot of regrets later. These actors who turned down million-dollar roles are great examples of that. They could have gotten a ton of fame and even some prestigious awards if only they had taken these offers.

So what makes them reject these roles? Well, it could be anything from scheduling conflicts to a misunderstanding of the script. So let’s find out about these actors who turned down million-dollar roles and the bizarre reasons behind their decisions. Anne Hathaway’s performance in The Devil Wears Prada is so iconic that we can hardly imagine anybody else plays Andy other than her. However, she only got the part after Rachel McAdams rejected it. If Rachel McAdams had accepted the role, she probably would have earned millions of dollars along with two Oscar nominations.

2. Matthew McConaughey in Guardians of the Galaxy Matthew McConaughey was asked to play the Star Lord in Guardians of the Galaxy Vol. 2, but he rejected the opportunity and chose The Dark Tower instead. The actor explained that with The Dark Tower, he had more chances to give his personal touch to the character since it was the first film in a franchise. Well, he missed the chance to become a big Marvel hero.

3. Brad Pitt in The Matrix Before Keanu Reeves, the role of Neo was offered to Brad Pitt but the famous actor turned it down. “I took the red pill,” he joked in 2020, referencing the choice in the film. The actor explained that he didn’t understand the script, so he let it go.

Although Pitt admitted that he had some regrets about turning down the role, he also thought he made the right decision. “If we were doing a show on the great movies I’ve passed on, we would need two nights,” he joked.

4. Nicolas Cage in the Lord Of The Rings trilogy Due to his unwillingness to leave his home for such a long period of time, Nicolas Cage refused the chance to play Aragorn in the Lord Of The Rings trilogy. He probably had some regret later as the trilogy would become one of the most successful movies in history. However, thanks to his decision, we got Viggo Mortensen!

5. Will Smith in Django Unchained Unlike other actors on this list, Will Smith actually loved the plot and wanted to join Django Unchained really badly. However, his view of the story wasn’t aligned with director Quentin Tarantino. “I just couldn’t connect to violence being the answer. Love had to be the answer,” Smith explained. Hugh Jackman was the first choice for the role of James Bond in replacement of Pierce Brosnan. However, he had to decline to offer because of his busy schedule. Between Marvel’s X-Men and the Wolverine movie, the actor hardly had any time to rest. Plus, Jackman thought that the script “needed to be grittier and real.” Had he accepted the offer, he would’ve made $82.4 million throughout the series. Among all the actors who turned down million-dollar roles on this list, Leonardo DiCaprio was probably the only one who rejected his role due to a friend’s advice. One of the film’s writers, Guinevere Turner, said she suspected Gloria Steinem was behind DiCaprio’s rejection.

The story went like this: Gloria Steinem took Leonard DiCaprio to a Yankees game and told him not to take the role. He just finished Titanic so there would be many young girls watching him, which was not good because American Psycho was extremely violent toward women. After that, Leo turned down the role. Like Will Smith, Laurence Fishburne also turned down Pulp Fiction because he didn’t share the same vision as Quentin Tarantino. Fishburne was okay with the character, but he wasn’t on board with the film’s messaging overall. He felt like it romanticized heroin and he had an issue with the adrenaline shot scene, so he refused the offer. John Travolta had a lot of regrets after he turned down Forrest Gump to star in Pulp Fiction. With Pulp Fiction, he had several Oscar nominations but won none of it. On the other hand, Forrest Gump won 6, including Best Actor which went to Tom Hanks.

Those are some actors who turned down million-dollar roles. Speaking of legendary movie characters, can you imagine another guy playing Wolverine instead of Hugh Jackman? Apparently, he and many more actors weren’t the first choices for their most famous roles.

10 Stars Who Dated Or Married Their Dream Celebrity Crushes

2 Best Entitled Karen Stories 2022 That Can Satisfy You