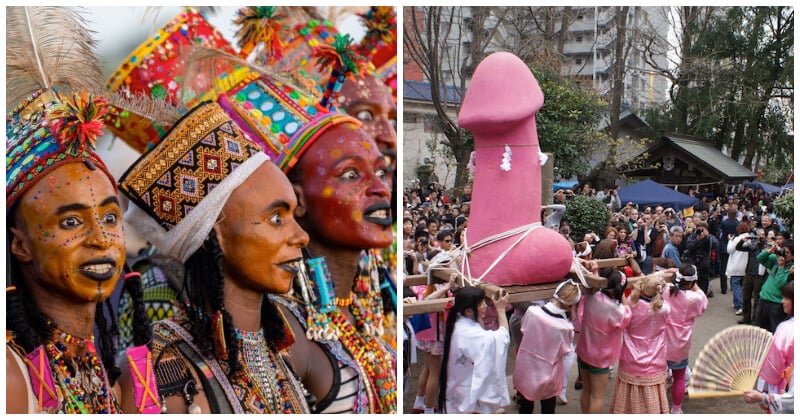 Over millions of years of history, humans gradually evolved from primitive to modern as today, hundreds of thousands of important scientific inventions were born that significantly improved our lives. However, in the world, there are still many eccentric customs, traditions, and rituals. It seems that the light of human civilization has not yet shone on those dark and backward lands. It must be said that it is fortunate that the scary rituals and cannibalism practices have almost been erased, but in many places, the custom is still considered an inevitable part of life. Join us to find out 10 of the most bizarre & horrifying traditions and rituals of the human world through the article below.

For more funny photos about related articles, check out our posts here and discover 10 weird beauty standards throughout history that you won’t believe were real.

This is a tradition implemented by many African countries like Cameroon, Benin, Guinea Bissau &Togo to make teenage girls look less ‘womanly’ to deter male attention,  rape, and unwanted pregnancy.

#3 The Dead Leave With The Fingers Of Living – The Dani people of Papua, Indonesia

The living will amputate their fingers to show love for the died ones in the family.

The bone powder and ash of the dead obtained after cremation will be mixed into a plantain soup and the deceased’s family will consume this.

During the festival, thousands of model penises are traded,sold, bought, eaten, thrown, worn, and followed through the streets in the form of enormous inflatable erections.

It’s not a macabre festival but their makeup looks scary like Halloween.

The ritual is practiced by both Muslims and Hindus. It is said to bring prosperity & happiness to the babies.

#9 Take The Pain Away – Phuket Vegetarian Festival In Thailand

15 Hilarious Face Swap Photos That Brighten Up A Gloomy Day!

Can’t Help But Laughing Out Loud Whilst Looking At These Hilarious Christmas Fails!

People Share 20 Things You Should Never Do In Their Country

20 Mildly Frustrating Things That We Can All Sort Of Relate

20 Moments When People Were Completely Destroyed By Just One Punchline

10+ Photos Shows Why Aquarius Boys Are Still Single, And They Are Hilarious

These Kids Are Definitely Going Places With Their Smart Logic

20+ Photos To Show Just How Fantastisk And Special Sweden Is

28 People Who Only Had One Job But Still Failed To Complete It, And The Results Are Hilarious

Offensive, Dorky Mugs People Bring To Their Office Are Now My Favorite Satires