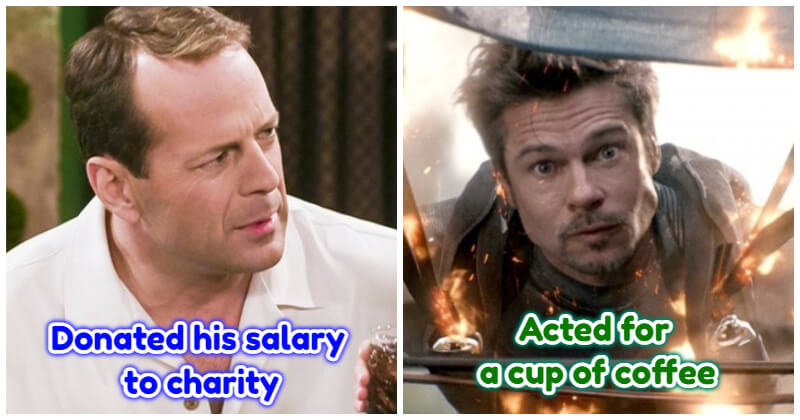 Hollywood isn’t exactly known for being frugal, especially when it comes to the salaries of the biggest stars. Most of the time, famous actors are paid millions of dollars for their roles in television shows and films. However, this is not always the case. There are those who will occasionally do the film for free or for a small fee. Or they chose to donate their earnings to others.

These celebrities accepted the task even though they would not be paid millions of dollars because they felt it was an important role for them to play. Whatever they chose, it was obvious that they were in it for more than just the money!

Today, we wanted to talk about famous people who have taken on significant roles without being paid or keeping any of the profits. What do you think about these celebrities’ choices? Brad Pitt acted in Deadpool 2 for a cup of coffee. It was the actor’s condition: if Ryan Reynolds brought him coffee, he would appear on the screen. Reynolds later admitted that his request was the most successful way of letting everyone know that Pitt was willing to work for nothing. Four Rooms is a 1992 black comedy film. This film’s cast is amazing. It featured Tim Roth, Antonio Banderas, Valeria Golino, Madonna, and Bruce Willis. There is a strange story surrounding the latter: Bruce wanted to act for free, so he did. However, his name was not listed in the credits because he broke one of the rules of the American Screen Actors Guild, of which he was a member. All film roles have to be paid for, according to the rule. Fans have a common rumor regarding Bruce Willis’ gratuitous presence in Friends. According to reports, Bruce co-starred in The Whole Nine Yards with sitcom star Matthew Perry and lost a bet to Perry. In actuality, the actor was paid a professional fee for appearing in three episodes of the show, but he gave the entire amount to charity.

A tragedy overshadows the film The Imaginarium of Doctor Parnassus in the minds of its followers. Heath Ledger, the lead actor, died while filming. Because the actor played the protagonist, the film’s fate was unknown.

The director decided to continue filming and enlisted the help of many Hollywood celebrities, including Johnny Depp, Jude Law, and Colin Farrell. All three not only acted in the film but also decided to quit their salaries, which were donated to a trust for the future benefit of Heath Ledger’s kids. Source: © The Fighter / Closest to the Hole Productions and co-producers

The Fighter is a true story of two boxing brothers. Mark Wahlberg played the lead role, for which he waived his professional fees. Mark also paid for the services of a nutritionist and a trainer because the job required him to acquire weight and then quickly lose it during filming. Later, the actor stated that he had appeared in several films that he was ashamed of. But The Fighter was Mark’s dream project, and he was happy with his performance. Priyanka Chopra is one of the most famous and well-paid celebrities in India. She is a Bollywood superstar and the Miss World 2000 contest. The actress starred in the 2009 film Billu. And, like Kareena Kapoor, she did it for free. The two young women refused to take their professional fees and returned the cheques they had received, claiming that they did not want to be compensated for their efforts. Singh is one of the highest-paid Indian actors and has been on Forbes’ list of the 100 most famous persons in India since 2012. The actor had a short cameo appearance in the film Finding Fanny, which he did for free. Furthermore, he devised the idea of introducing the character he later played into the plot. A Rainy Day in New York, a romantic comedy, got mostly positive reviews. Timothée Chalamet, Elle Fanning, Jude Law, Rebecca Hall, and singer Selena Gomez were some of the cast members. By the way, Rebecca and Timothée decided to skip their salaries for this film, donating the money to charity.