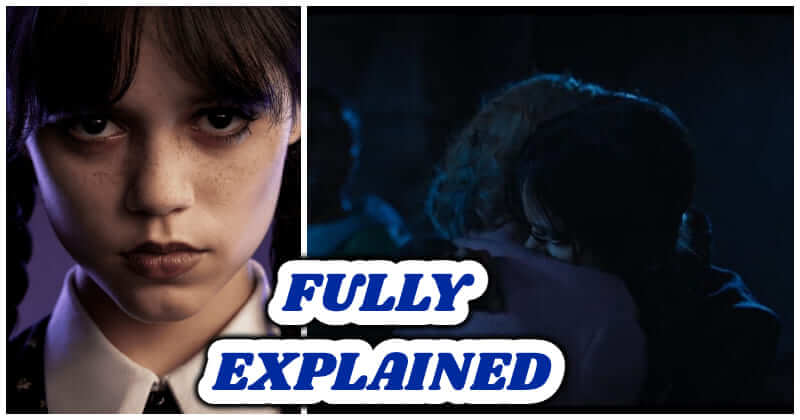 Who is the monster in Wednesday? Here we go! Wednesday, Addams is transferred to the Nevermore Academy by her parents after she is expelled from her previous school for the evil vengeance she exacted upon a bully.

Nevermore Academy, where both of Wednesday’s parents once studied (and eventually fell in love with one another), is now where misfits and oddballs congregate, and Wednesday feels quite at home.

But she does not share this opinion and plans to skip out on the academy at the first available opportunity. In the first few days, she faces two separate but equally dangerous situations. She also observes the student that disclosed to her a prophecy made decades ago perish at the hands of a monster that spares her for an unfathomable reason.

Her story doesn’t add up for anybody else, and the student she thought was mauled to death turns up alive and well when she regains consciousness. This level of horror, near-death experiences, and unexplainable shock has convinced Wednesday to rethink her decision to ditch school altogether. Snapping back with her sharp and incisive out-witting one-liners and murdering most with her blazing eyes, Wednesday is hard at work solving the enigma of the bleak outset of Nevermore Academy.

Meanwhile, she helps Enid — her cheery and bubbly roommate with diametrically opposite personality and aesthetics — win the Poe Cup. Regarding the recent incidents, the sheriff of Jericho town is questioning Wednesday. Later, Wednesday finds a secret club of pupils in her school. Meanwhile, Outreach Day arrives, and the outcasts go out to socialize with the normies.

Wednesday, however, thanks to her visions, discovers the awful history of Jericho’s founder, whom everyone honors without knowing. The incredibly edgy goth newbie has managed to attract quite a several lads competing for her love while she keeps causing a racket and uncomfortable situations for Principal Weems. As the night of the Rave’N dance approaches, the antisocial goth protagonist’s love triangle with two boys sparks envy and heartbreak.

Who Is The Monster In Wednesday? Explained Wednesday, who has a Hummer buddy named Eugene, who she likens to her brother, is sidetracked by a distasteful joke and fails to intervene to save Eugene from suffering a catastrophic injury. Amid everything that’s happened recently, Parents Weekend has arrived, and the Addams family has come to see their precious girl. The family’s past is revealed following Gomez Addams’ unfortunate incarceration.

Friends want to do fun things like celebrate birthdays and go on dates while the investigations are ongoing, but Wednesday is dreading it. When Uncle Fester shows up, he helps her with her inquiries and later tends to Thing after he’s been stabbed. Addams has Xavier, whom everyone suspects of being the Hyde monster and the killers, detained as the investigation begins.

In the meantime, despite her icy exterior and intense passion, Addams finds herself slightly seduced by the romantic convictions Tyler instills. However, recent developments have revealed a startling discovery and added a surprising twist to the story. Addams continues working as the ultimate confrontation, and the revelation of truths leads to the terrible death of Principal Weems. Meanwhile, Addams defeats the revived pilgrim who threatened to wipe out her ancestors in the 17th century.

After the school has had a holiday and Addams has returned home, the enemies have been defeated, and some broken relationships have been repaired. However, the story’s not quite ended yet, and loose threads remain that need untangling.

#2. Who Is The Monster In Wednesday? Wednesday has a hunch throughout the novel that Xavier is the Hyde monster, but the truth completely blindsides her at the very end. The series ends with the shocking revelation that Tyler is Hyde and has been killing everyone as the monster the whole time. Wednesday doesn’t pay him much attention because he’s always the one to offer assistance—exactly the kind of thing she despises—but she grows to like him over time.

This leads to her first kiss with him, which they have in the diner before she is hit with a second set of visions revealing that Tyler is responsible for Dr. Kinbott’s death. Later, when she tries to extract a confession from him, she resorts to torturing him to gain the information she needs. Friends disagree, though, and they phone the sheriff, who rushes over to rescue his son and arrest her.

At the station, though, Tyler goes full mask-off in front of Wednesday, revealing to her the atrocities that he will assist wreak on all others. After the series, our hero and Enid defeated Tyler and destroyed his master’s plan.