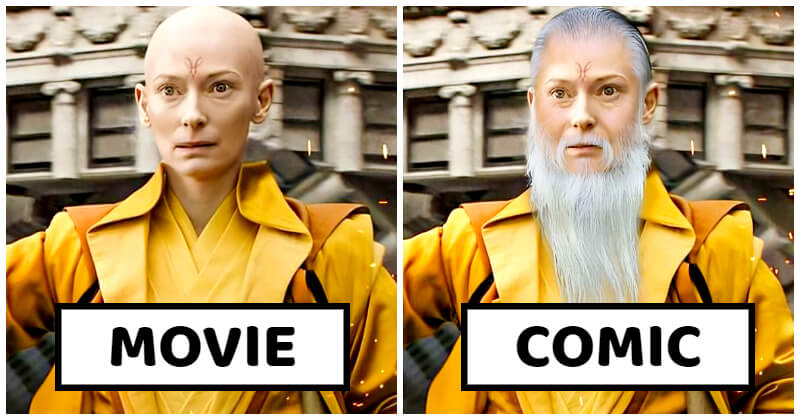 Every time we hear the news about new movie adaptations of books, comics, or video games, we have to brace ourselves and get ready to see different versions of our favorite characters. The changes are inevitable. However, movie directors and screenwriters sometimes take things way too far and completely transform a character into a totally different person from who they are in the source material.

Is this frustrating? Most of the time, the answer is yes. Will movie directors stop doing this? Well, probably not. However, not all changes are bad. Some changes are much more fitting for the overall script and the community guidelines. So let’s see how these characters look in movie adaptations versus how they look in the source material and see which change is good and which is not. If you’re a fan of the video games and novels about the Witcher, chances are you will immediately notice the differences between the original Triss Merigold and the Netflix version. In the original, the sorceress was described as a young girl with blue eyes and brown ginger hair. Triss’s hair color was later changed in the second season, but she still looked very different from the Triss Merigold we knew in the games and books. In the first Game of Thrones book, Daenerys was only 13 years old. She was a short slim girl with purple eyes and silver-white hair. When she went through the ritual and became the Mother of Dragons, her hair burned and she became bald. Her hair did grow back slowly later on, but nowhere near as beautiful as it was in the series.

In the adaptation, Daenerys was 17 years old since the beginning of the series. Her appearance also looked a lot different from the book version. Speaking of Game of Thrones, Daario Naharis’s appearance also has been altered a lot. In the book, he was supposed to be very flamboyant. His beard was blue and was cut into 3 prongs. He had blue eyes and curly hair that fell to his collar. Naharis even painted his pointed mustache gold!

4. The Ancient One – Doctor Strange In the comics, The Ancient One is an elderly man with a white beard. However, the director thought this look was too stereotypical and decided to cast Tilda Swinton instead. Despite looking nothing like the source material, we gotta admit Swinton does an amazing job as the Sorcerer Supreme. The books describe Annabeth Chase as a blonde girl with gray eyes. She is the daughter of the Greek goddess Athena, so her personality is a lot like her mother’s. Annabeth is an extremely intelligent and determined warrior, which often shows through her intense and analytical gaze.

However, her character’s traits were going against the stereotypes associated with blond hair, so her appearance was altered in the movie adaptations. The Grandmaster in the comics is a blue skin man with a big head and yellow eyes without pupils. The director didn’t want to cover the actor’s appearance with a ton of makeup, so they decided to change the character’s look. Some of the canon traits of the comic version still can be spotted in the movie, like the blue line of the Grandmaster’s chin and the blue color of his lower eyelids. Aunt Petunia Dursley looks a lot prettier on screen than she does in the books. In the movie, she is a dark-haired woman with a fit body. However, the books describe her as a slim blonde woman with a long neck and an “almost horse-like” face. Yikes! In the book, Dorian Gray is a charming young gentleman with blue eyes and golden locks. Ben Barnes was ready to dye his hair and wear contact lenses for his role. However, the director thought he was handsome enough on his own and kept his onscreen appearance that way. In the book, Jo was described as “very tall, thin, and brown, and reminded one of a colt.” Saoirse Ronan has pale skin, but she nails every other aspect of her character such as the “decided mouth, “comical nose’ and the sharp, gray eyes. Robert Downey Jr.’s Sherlock Holmes looks nothing like the book version. In the original, the legendary detective was described as being over 6 feet tall with sharp and penetrating eyes, a thin and aquiline nose, and he has a very intimidating atmosphere around him. Lewis Carroll took inspiration from a real young girl named Alice Liddell to write Alice’s Adventures in Wonderland, so the protagonist also shared a lot of similarities with this girl. The book version of Alice has a short dark-brown bob with bangs instead of long blond locks like in the movie adaptations. The phantom is nowhere as handsome as he is in the movie. Gaston Leroux described him as an incredibly thin man with very deep eyes and yellow skin. He has a small, almost invisible nose, and is almost bald. No wonder why Christine didn’t choose him.

These characters surely have been changed a lot for the movie adaptations, but they are not the only ones that got changed. A lot of movies cast actors who are much younger or older than their roles, and the differences show. Ever wonder what these actors would look like if their ages matched their characters?

17 Pairs of Pictures, Taken On The Same Day, Showing That Instagram’s Photos Can Be Far From Reality

10 Actors Who Almost Worked For Free For Their Iconic Roles

10 Best Titanic List Quotes That Will Move Your Heart Again