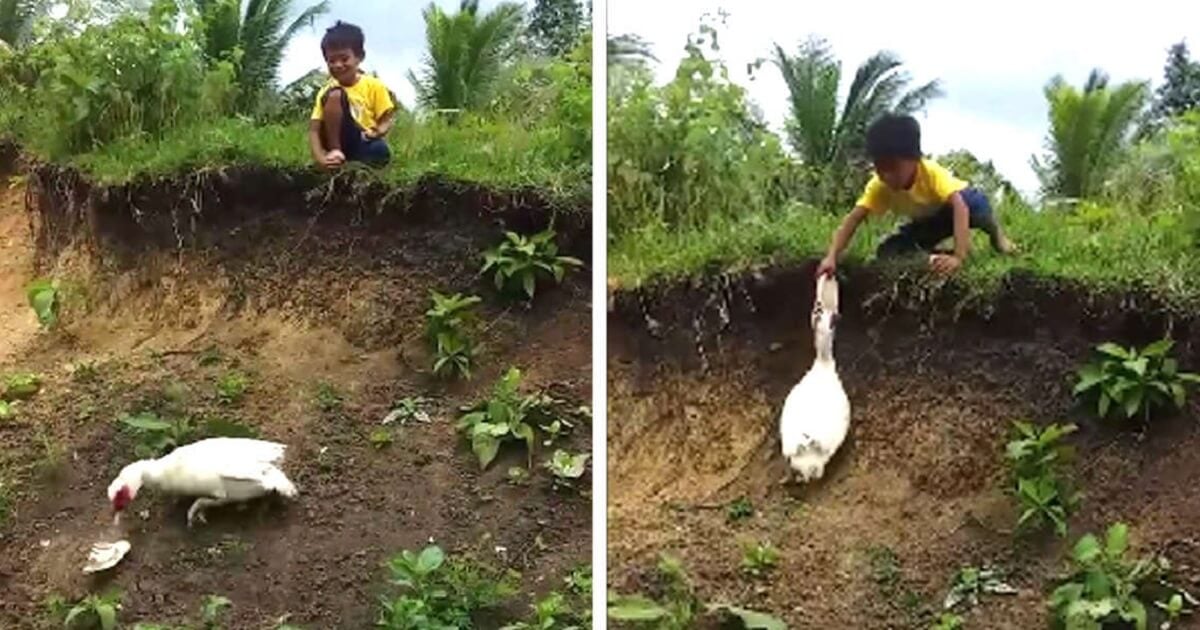 This is the endearing scene a thoughtful duck retrieved a boy’s flip-flop and gave it back to him. This curious scene caught Myla Aguila’s eye, a woman who lives in Quezon Province, the Philippines and thankfully, she quickly captured this precious moment on her camera.

Aguila was walking around the mountainous Sitio Madaguldol village near her home when she spotted a young boy squatting atop a small hill off the road. It turned out that the young boy was facing a little problem – one of his flip-flops had dropped down the small slope and was now out of reach.

Although the boy could easily have climbed down to take it, the kind duck got there first and retrieved the flip-flop for him. Instead of clambering down through the mud, he watched as the white duck picked up his white rubber flip-flop.

Aguila couldn’t believe her eyes because ducks are known as stupid creatures, which are usually raised for commercial purposes, mainly because of their eggs. However, this smart duck in this video makes us think again.

“I was dumbfounded. The duck is kind. He really helped, even though he doesn’t know the child,” Aguila wrote online.

“I asked around, and people told me that the duck is not owned by the boy. But they come from that same small village so they must be friends,” Aguila said.

As you can see in the video, the determined duck drops the flip-flop three times but it doesn’t give up and keeps picking it back up in its beak. Finally, the duck reaches to the top and returns the slipper to the boy.

”I thought it was very sweet the way the duck kept picking up the shoe and giving it back to him.”

“There is a feeling like a person,” she wrote, adding: “I will feel mercy on them because of what I saw.”

If you love this video, let’s share it with your friends and family members!

Kind Couple Fed A Stray Cat, And Then She Returned With Her Cute Kitten

Dad Gets Criticized For Lying To His Daughter, But Reddit Is Rallying Around Him