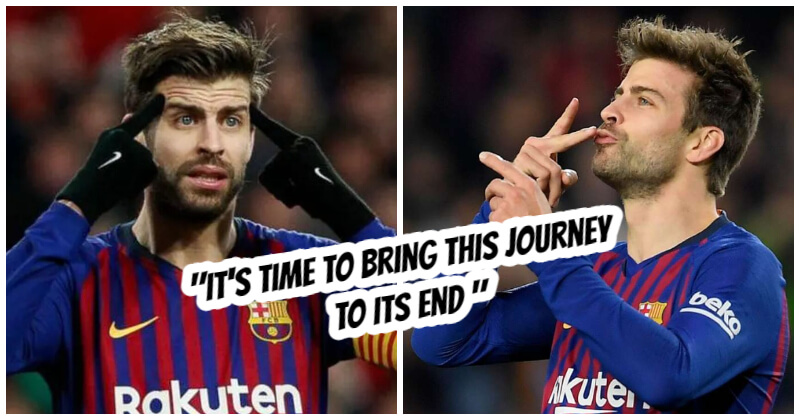 The Barcelona defender, Gerard Piqué posted a touching video on Instagram on Thursday, ahead of his final game against Almera on Saturday. Piqué, who split from longtime girlfriend Shakira in June, joined the club’s academy in 1997 and returned to the club in 2008 after a stint with Manchester United.

“The last few weeks, months, people have been talking about me,” Piqué said in the video. “Until now, I have not said anything, but now I want to be the one who is talking about me.”

1. Now is the time to bring this journey to its end

While the video began with newer footage of the soccer star, it also included throwback footage of him as a child kicking a ball around. As Piqué explained, he’s been a Barcelona fan after being “born into a football-loving family,” and his goal wasn’t even to be a pro soccer player — it was to specifically play for Barcelona. With his final game at Camp Nou taking place Saturday, Piqué revealed that it’s now time for him to “become a regular fan” and pass down the tradition of loving the team to his kids — Milan, 9, and Sasha, 7, whom he shares with Shakira, 45. “And you know me, sooner or later I will be back. See you at Camp Nou. Visca Barca, always and forever,” he concluded. Piqué has won eight LaLiga titles and three Champions Leagues during his stay in Barcelona, ESPN reported. Before moving on from international soccer in 2018, he helped Spain earn the World Cup in 2010 and the European Championship in 2012. He played a total of 615 games with Barcelona, CNN said, and there have been rumors in recent years suggesting he may want to run for Barcelona’s club president.

“Piqué is part of the Barca badge, he has achieved everything with the club,” President Joan Laporta shared in a statement. “He will always be an icon for the culers, he has more than demonstrated what he wants from Barca. 25 years he has been linked to the club. It has been an honor to have him as a Barca player.”