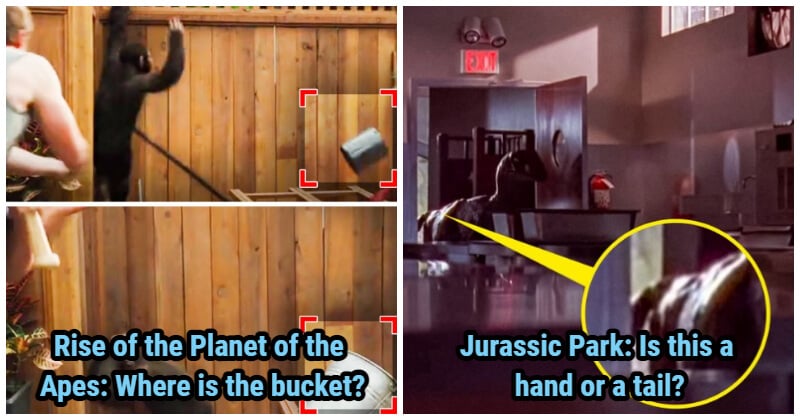 It often seems strange when a glaring error sneaks into the movie considering how many factors and staff people it takes to make a movie.

Movies are significant undertakings that may take years or even several months to complete. Many components of filmmaking, from pre-production to post-production, remain hidden from viewers. What matters, though, is how the finished product turns out and how well it does commercially and critically.

Given that just 403 films were released in the US and Canada last year—a lower number than normal due to the pandemic—it is no surprise that mistakes can always happen. There are many things that can go wrong in a movie, from wardrobe malfunctions and insufficient extras to continuity errors in the script or editing. No matter the budget or the cast, no movie is safe.

Of course, you’ll need keen eyesight, a lot of spare time, and a huge bucket of popcorn to spot these really small movie mistakes. We dug deep into the film industry to uncover 10 subtle errors in a few well-known movies. Let’s begin, so get your popcorn and magnifying glass ready. The Twilight saga’s vampire Edward and mortal Bella are among the most well-known movie couples. The moment they began speaking, paranormal occurrences began to occur. In the 2008 film, we see that the decoration on the shelf behind Edward had changed following a brief conversation with Bella. Given that Avengers: Endgame is one of the most popular films of all time, we couldn’t leave it off our list. We can see that the pancake is split in half in the scene where some children approached Hulk to take his picture (00:38:00). The two parts are attached to one another after 38 seconds. Could Doctor Strange have been involved?

#3 Rise of the Planet of the Apes Source: © Rise of the Planet of the Apes / Twentieth Century Fox and co-producers

We found this continuity error in Rise of the Planet of the Apes by using our magnifying glass for continuity mistakes. Little Caesar sneaks out to play and is attacked by his neighbor, who also knocks over the buckets on the table (00:19:30). But just as James Franco’s character Will Rodman looks to be standing up for him, we see another image in which the bucket is on the table (00:19:34). We trained our eyes to spot this error from Jurassic Park, which some viewers swear is a hand and others say is the tail of the dinosaur. We encounter this scene one hour, forty-nine minutes, and eight seconds (1:49:08) into the film. Yes, we do believe it to be a hand. Do you see anything?

#5 The Fast and the Furious Source: © The Fast and the Furious / Universal Pictures and co-producers

At least for us, it took 20 years to realize that Johnny Tran from the original Fast and Furious movie was the fastest of them all. After the film has been running for one hour twelve minutes and 56 seconds (1:12:56), Johnny is shown sporting a black shirt. He changes into a sleeveless T-shirt three seconds later. A leopard named Sabor makes multiple appearances in the animated film Tarzan, usually making threatening and ferocious gestures. But if we skip ahead to minute 00:06:40 in the movie, we can see that Sabor’s ears transform from black to orange. This sweet tale not only warmed our hearts but also made us chuckle when we discovered a few errors. They walk through green umbrellas in La La Land as Sebastian questions Mia about their current relationship (00:39:57). They take a few more steps and wait a moment before returning to the umbrellas (00:40:08). Let’s keep on with the cute couples. Now it’s Pretty Woman’s time. During the breakfast scene, Julia Roberts’ Vivian is eating a delectable croissant (00:32:21), but as soon as she confesses that she only has a high school diploma (00:32:38), the croissant transforms into a pancake. Who are we to evaluate Julia’s hunger, though?

#9 Harry Potter and the Sorcerer’s Stone Harry Potter’s scar is unquestionably the most well-known in film, and not just because it resembles a lightning bolt but also because “He-Who-Must-Not-Be-Named” left it there. But in Harry Potter and the Sorcerer’s Stone, we learn that Dumbledore does not have the mark on his forehead when he abandons Harry with a family of Muggles (non-magical humans) (00:03:42). The second photo features a fantastic appearance (00:03:49). We’re about to finish our popcorn, but we had to watch this blockbuster. The Titanic was included on our list as well. We see Jack in suspenders, tied to a ship’s tube (02:06:06). Then Rose appeared to have cut off his suspenders after freeing him with an ax (02:06:15). But in the following picture, Jack is back with them.

#1 Legends of the Fall Source: © Legends of the Fall / TriStar Pictures and co-producers

Due to his flawless blond hair, Brad Pitt’s character Tristan from Legends of The Fall has drawn criticism for appearing more like a rock star from the 1990s than a peasant from the early 20th century. If only directors consistently made mistakes like that. Agent Carter’s hair in Captain America: The First Avenger may seem like a little detail, but it’s important to some people since, according to legend, women had to wear their hair up in the military during World War II. But we adored Peggy’s fashion sense. In Django Unchained, Jamie Foxx wore spectacles while portraying a slave. If the movie hadn’t been set in the late 19th century, when the first sunglasses as we know them now appeared in 1929, there wouldn’t be a problem with this. We cannot, however, dispute how stunning they appear on Django.

9 On-screen Couples That Are Perfect For Relationship Goals