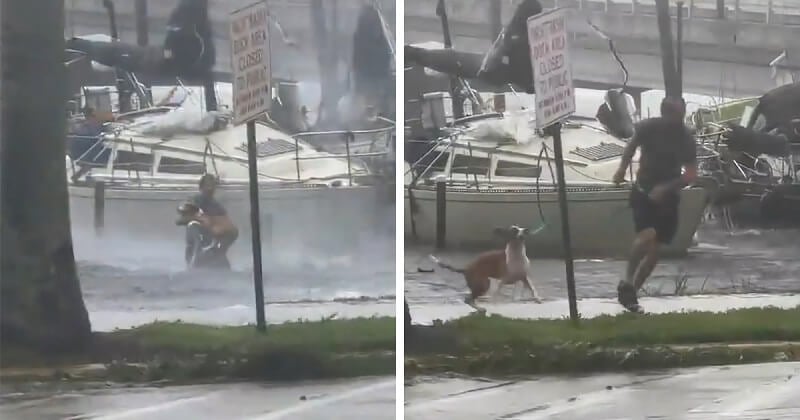 According to Wikipedia, Hurricane Ian was a large and destructive Category 4 Atlantic hurricane. It was the deadliest hurricane to strike the state of Florida since the 1935 Labor Day hurricane. While consolidating their shelters, some warmhearted people still thought of poor animals that were neglected outside. They couldn’t bear seeing those stranded little beasts swept away by the strong gales and heavy rains. Even though they had to risk their lives, they wished to protect these abandoned animals at all costs. After witnessing their brave, heart-warming actions shared via the internet, numerous people are moved deeply. We are among those. No words can describe how thoughtful these heroes were when they ignored the dangers of the hurricane and helped the miserable creatures in the nick of time. Henceforth, today, we desire to express our respect for these ordinary yet heroic people. Firstly, hat off to Mike Ross, a 29-year-old man from Bonita Springs. While sheltering in his parents’ house, he saw a cat hiding from the storm surge atop a mounted AC unit. Immediately, he decided to wade through the rapidly folwing, knee-high water and grabbed the orange cat. Then he held the kitty and took her inside. The both of them made it back safely.

Mike’s mom, Marybeth Ross, captured the moment on her phone. Afterward, Mike’s girlfriend, Megan Scavo, uploaded the video clip on her Twitter account. They wanted to keep the cat and named her Storm. She was kind of traumatized, but she is better now. They also linked to a GoFundMe page to raise money to restore their home and other houses damaged in the storm. Secondly, we wish to applaud an unknown man who rescued a dog from a sailboat. Brian Entin, a man who was with him at the time, filmed the heroic moment. Entin helped him to calm the dog while he went back and saved a cat. Later, Entin tweeted the video on his account and affirmed that everyone, including the pets, was safe.

Dog rescued from sailboat in Fort Myers. He went back and got a cat too. pic.twitter.com/JFcWl4972g Thirdly, we want to thank all rescuers for starting to do their duty right after the weather allowed them to go outside. Despite demolished buildings and houses, power and water cuts, and hundreds of obstacles, they not only rescue people but also try to save animals. Staff and volunteers at many rescue organizations in Florida have been working together to help evacuate shelter pets from devastated areas. With tons of effort, they deserve to be honored and awarded. Last but not least, here is the emergency protocol for natural disasters if you own pets. If you must leave your pets behind, take appropriate action! Leave out plenty of food and fresh water and, most importantly, do not restrain your pet. Boost awareness of your pets’ location by notifying local law enforcement, animal control officials, and animal shelters. If you can, leave a note on the window or door of your resident indicating that the pet is inside for rescuers.

Do you have any praise for these brave rescuers? Please sound off in the comment section below after sweeping the like-share button and follow us!

Artists Reimagined Cats As Astrology Signs, And The Results Are Awesome

Meet The Mystical Harpy Eagle, The Largest Eagle in The World