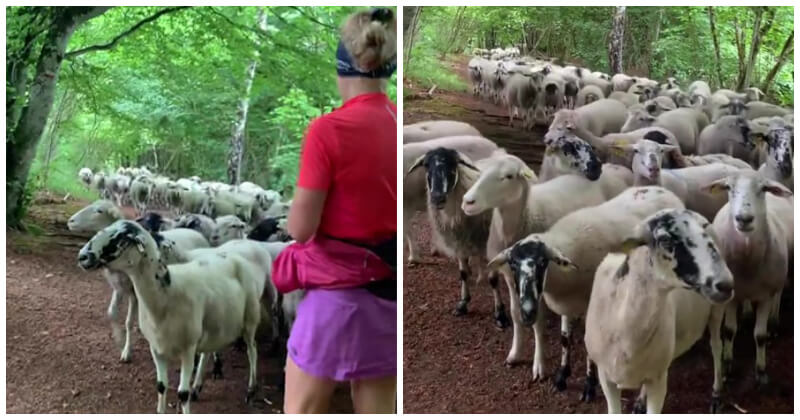 Have you ever imagined you would go for a run with some strangers you accidentally met on your way? It is totally a possible prospect, without a doubt. What about some “strange” animals? Maybe not too weird. But if you run with a flock of sheep behind, it’s definitely incredible!

Though it sounds unbelievable, it did happen, and Eleanor Scholz had a chance to witness it. Scholz was traveling through France with her partner. She was going for a hike alone when she caught some sheep baaing. She thought it was usual to encounter the sheep grazing there until a whole flock appeared in front of her. However, what surprised her was the sheep were following a runner for no reason. “It took me a moment to understand what I was seeing,” Scholz remembered. “At first, I thought maybe she was a shepherd, but she wasn’t dressed like any shepherd I’d ever seen, and it seemed unusual that a shepherd would be running. Then, I was concerned that she was being chased and that there might be some risk of being stampeded, so I got off of the trail and stepped behind a tree. When she stopped to talk with me, all of the sheep stopped and waited for her, and that’s when I realized that something truly whimsical was happening.”

When the runner stopped to explain this awkward situation to Scholz, the sheep patiently waited for her. It turned out that the flock got lost, so they decided to see her as their leader. The animals seemed fine with the sudden stop, and some even came toward Scholz to say hi. “They all just stopped and waited, it was the funniest thing,” Scholz said. “Some of them immediately walked over to me, and I worried that they’d start following me instead, but they stood there patiently while she and I talked. They didn’t seem stressed or particularly winded.”

It was hilarious because the sheep emulated exactly what the runner did. They stopped when she did, and they followed her when she continued the run. “They immediately ran after her,” Scholz shared. “The few sheep who had been checking me out as a possible new shepherd changed their minds when they saw their friends start to leave — ultimately the whole flock stuck together and followed the runner off down the trail.”

The runner thought she should get the sheep out of this confusing circumstance by leading them to an area with some pastures. She had no clue why they got lost and ended up running after her, but she really hoped they could return safely to their owner. “She seemed resigned to her new role as [a] shepherdess and left me with the impression that she would figure it out and find somewhere safe for them,” Scholz said. “I’d love to know the whole story, but I only got a brief glimpse of her wild sheep encounter and am happy just to have been able to witness it.”

@ele_anormousOne if the best things I’ve seen. Do you think theyre still chasing her?? 🏃🏻‍♀️🐑🐑🐑🐑🐑🐑🐑🐑🐑🐑 Originally posted on my instagram @elea_gram and it went viral!! Over 14 millions views and counting

What do you think about this whimsical story? It must be a one-of-a-lifetime experience for the runner. Let’s share your views with us in the comment below!

People Share The Weirdest And Dumbest Reasons Why They Got Fired

20+ Brilliant Cat House Ideas To Step Up Your Pawrenting Game

Elderly Man Sends His Neighbor A Letter Of Thanks For Letting Him Babysit Their Pets, The Letter Is Tugging At Internet’s Heartstrings

20 People Who Experienced the Dark Humor of the Universe

23 Funny Parenting Tweets That Will Lighten Your Mood Up

Funny Presentations That Certainly Get All Audiences To Remember

18 Products Of Design Therapy That Reinvigorate Your Space Perfectly

30 Satisfying Petty Revenge Stories That You Will Definitely Use