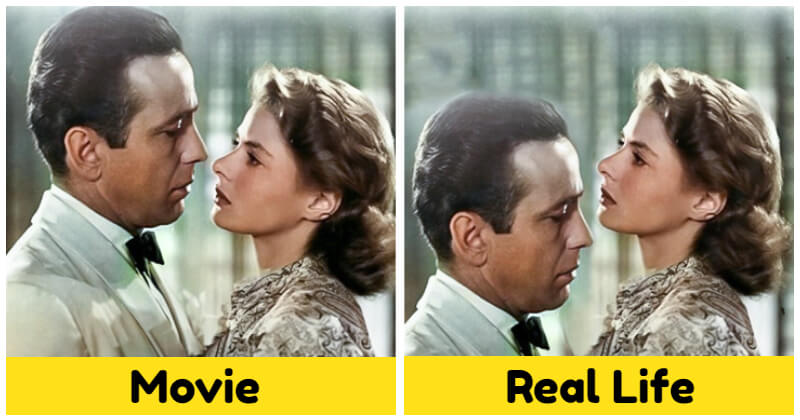 It is hard to judge how tall actors actually are when just watching them in a movie. To make their character look exactly like they are described in the script, filmmakers use tricks to alter the audiences’ perspective on the actors’ height. There are many actors whose real heights are completely different from what we thought.

Actors appear taller on screen than in real life, which is a real bonus for those who didn’t inherit tall genes from their parents. Actually, there are many cases in that actresses are taller than actors but filmmakers try to hide that. Sometimes, their height differences are exaggerated.

Below are 13 actors who turned out to be a different height than we imagined. If you find our article interesting, click here and here to read more. To get a good shot, Gillian Anderson needed to look higher than she was (5’3’’). The actress revealed that in a movie scene when the characters entered a room, she jumped onto something to look taller. One time, she even fell down because she forgot she was on a box. When watching “The Hunger Games”, we couldn’t realize the height difference between the main stars. In reality, Josh Hutcherson and Jennifer Lawrence are 5’5’’ and 5’9’’ respectively. The actor often jokes about it. Camera work hid well a significant height difference. On-screen, Daniel Radcliffe is taller than Emma and the same height as Rupert Grint but it’s not true. He is the shortest person. Despite his height, it’s not a problem for his career. Character Hagrid is depicted that twice as big as a normal person but in fact, Robbie Coltrane, who played the character, is approximately 6’. Director Chris Columbus, said that he could have made Hagrid even taller if he’d had financial and technical resources at the time. Watching “Iron Man”, we always see Tony Stark being much taller than his assistant, but in fact, Robert Downey Jr. is about 5’8’’ and Gwyneth Paltrow is 5’9’’. Therefore, the actor wore shoes on heels. Many eagle-eyed fans discover that the height difference between Ingrid Bergman and Humphrey Bogart is never consistent. The director hid the fact that Bergman was taller than Bogart by making Bogart sit on boxes and pillows. In other cases, Bergman even had to slouch. It had a rumor that during the filming of “Fast & Furious”, Vin Diesel and Dwayne Johnson had an argument so they didn’t want to work together. As a result, they were filmed separately and their scenes were put together through editing. Some scenes look very strange: Diesel seems to be a giant next to Johnson. Have you ever wondered why Michael Clarke Duncan looks like a giant compared to his colleagues in “The Green Mile”? To create an optical illusion, the crew used some tricks though Ducan is just 1 cm taller than David Morse. Ducan’s bed and other pieces of furniture around him were smaller than usual to make him look huge. In the Marvel Universe, Scarlett Johansson needed to look taller to look good with Evans. She is 5’3’’ and Evans is 6’. To portray Bane in “The Dark Knight Rises” well, Tom Hardy not only needed to go to the gym but needed to increase his height to look good next to Christian Bale. He was required to put on shoes on a very high platform. In “The Last Song”, Miley Cyrus seems shorter than Liam Hemsworth, but only a little. The camera hides a big height difference. Cyrus is 5’5’’, and Hemsworth is about 6’5’’. The height difference between Amanda Seyfried and Justin Timberlake is bigger than we thought. During filming, the actress had to wear heels. In an interview, she revealed how she could run fast in such shoes. The camera work in “Water for Elephants” was incredible. Although Reese Witherspoon’s height is 5’1’’ and her costar Robert Pattinson’s height is 6’1’’, their height difference on screen is not too big.

7 Stars You Didn’t Know Were Besties In High School